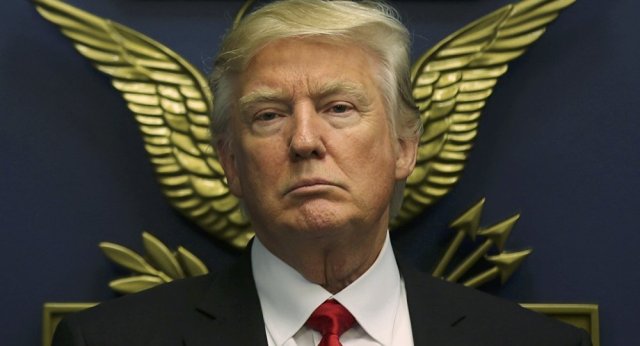 “I want to tell you that the Jewish people have a long memory, so we remember the proclamation of the great king, Cyrus the Great, the Persian king 2,500 years ago. He proclaimed that the Jewish exiles in Babylon could come back and rebuild our Temple in Jerusalem. We remember a hundred years ago, Lord Balfour, who issued the Balfour Proclamation that recognized the rights of the Jewish people in our ancestral homeland. We remember 70 years ago, President Harry S. Truman was the first leader to recognize the Jewish state. And we remember how a few weeks ago, President Donald J. Trump recognized Jerusalem as Israel’s capital. Mr. President, this will be remembered by our people through the ages.”

Those were the remarks Israeli Prime Minister Benjamin Netanyahu spoke on his visit to Washington D.C. on Monday the 5th of March. PM Netanyahu also extended an invitation to President Donald Trump to visit Israel in May for the opening of the US embassy in Jerusalem. When asked by reporters if he’d attend Trump replied:

“I may. I may. They have started, as you know, construction and I may. We’ll be talking about that and other things.”

As you recall, last December President Trump made an official declaration recognizing Jerusalem as Israel’s capitol, and announced his intentions to move the US Embassy there. Controversial for sure. The move was at first planned for 2019, but got moved up to May just in time for the 70th anniversary of Israel’s independence since they became a nation (again) in 1948.

I have heard many brothers point out, 70 is a significant year for Israel so there is excitement in the air. Why so significant? No one seems quite sure. Except for 7 being a Biblical number, and the discussion of Daniels 70th week, no one I have talked to can give any concrete connection.

Still it’s a milestone for Israel no doubt, and the Israeli government is pulling out all the stops.

From the Times of Israel:

Israel will celebrate 70 years of independence this year, and Culture Minister Miri Regev on Monday promised a massive party, as she revealed some of the plans for the anniversary events.

“I thought it would be appropriate to implement a concept of ongoing events, beginning with the Independence Day ceremony on Wednesday and ending on Saturday evening: 70 hours of Israeli festivity that will bring citizens together across the country in varied and joyous events,” Regev said at a press conference where she unveiled the official logo for the nation’s 70th anniversary to be held under the tagline “A Legacy of Innovation.”

Regev said the annual state ceremony at Mount Herzl on April 18 will be accompanied by an official song to celebrate Israel’s 70th, followed by the largest fireworks display in the country’s history.

This will be followed by an all-night beach party stretching “along 70 kilometers (some 43.5 miles), from Tiberias to Eilat.”

April 19 will feature a “light parade” honoring Israeli innovation, the annual International Bible Quiz, and the Israel Prize ceremony, among other events.

On Friday, April 20, street parties will be held throughout the country in homage to the spontaneous hora dances that erupted in streets after David Ben-Gurion declared the establishment of the state on May 14, 1948. This will be followed by public Shabbat services.

Official events will end Saturday night with a musical event that Regev promised will represent a soundtrack of Israeli society.

May 14th is also the day of the official opening for the US embassy.

So back to PM Netanyahu…

He compared President Trump to 3 people.

He compared Trump to Lord Balfour:

“We remember a hundred years ago, Lord Balfour, who issued the Balfour Proclamation that recognized the rights of the Jewish people in our ancestral homeland.”

“We remember 70 years ago, President Harry S. Truman was the first leader to recognize the Jewish state.”

He talked about Trumps decision to recognize Jerusalem as Israel’s capitol:

”And we remember how a few weeks ago, President Donald J. Trump recognized Jerusalem as Israel’s capital. Mr. President, this will be remembered by our people through the ages.”

But he also compared President Donald Trump to King Cyrus:

“I want to tell you that the Jewish people have a long memory, so we remember the proclamation of the great king, Cyrus the Great, the Persian king 2,500 years ago. He proclaimed that the Jewish exiles in Babylon could come back and rebuild our Temple in Jerusalem.”

King Cyrus, as Benjamin Netanyahu pointed out was the king who made possible for the rebuilding of the Jewish Temple.

It’s becoming clear what Netanyahu was excited about. Donald Trump may be the one responsible for the rebuilding of the next Temple!

It’s not a recent thing. Comparisons between President Trump and King Cyrus have been made since he was candidate Trump running for president, and many Christians made a huge deal about it.

The earliest and most visible public proponent of the Cyrus connection was Lance Wallnau, a business consultant who has a doctorate in ministry. In 2016, before he met candidate Trump, “the Lord spoke” to Wallnau, telling him: “Donald Trump is a wrecking ball to the spirit of political correctness.” Before his second meeting with Trump a few months later, Wallnau saw an image of him as the 45th president and, once again, heard God speaking: “Read Isaiah 45.”

Wallnau was impressed that God was speaking to him again – and impressed, as well, by the numerical connection between the 45th president and the 45th chapter of Isaiah. “Thus says the Lord,” the chapter begins, “to His anointed, to Cyrus.” Reading further back in Isaiah, Wallnau saw that the Lord had named Cyrus “My Shepherd…” saying to Jerusalem “‘You shall be built,’ and to the temple ‘Your foundation shall be laid.’”

To Wallnau, the message was clear. Trump had been elected by God and would soon be elected by Americans to fulfill the prophecy. He was a warrior against the global “demonic agenda”, “raising the warning cry about the unraveling of America.” Trump’s obvious faults and flaws only confirmed the prophecy: Cyrus, like Trump, was powerful, rich, and pagan, not at all godly.

More from The Guardian:

And in the months since Wallnau first reported his communication from God, other prominent Evangelists, including Curt Landry and Derek WH Thomas, have spread the word about the Cyrus prophecy. Meanwhile, another Evangelical with a large following, Michael Brown, has been speaking of Trump in a more “nuanced” way, not prophesied but as “parallel” to Cyrus.

Some ultra Orthodox Jews, like Rabbi Matityahis Glazerson, have also embraced the Cyrus prophesy. For them Trump is a “Moshiach,” as well as a Cyrus, a Messiah-like figure who will help Israel to “settle properly in its land”. Trump’s support for Israel, his daughter’s conversion to Judaism, and the president’s commitment to moving the US embassy – a kind of modern temple – from Tel Aviv to Jerusalem, confirm the prophecy.

So Isaiah 45 equals Donald Trump the 45th president, and he’s going to bring on the new temple, which of course would almost certainly usher in the End Times!

That’s the theory at least.

This is called “vessel theology” by the way.

It was surprising to me to find so many secular articles on this very subject, in fact I’d say more than Christian ones, but there are plenty of Christian news sites and blogs that have written about this. Here is link to Charisma News that also explores this “vessel Theology” of Donald Trump being (I am assuming) the “vessel” of King Cyrus. Even more surprising, are the numerous Jewish news sites and publications who are also talking about the Trump – Cyrus connections. It seems everyone is making a huge (or should I say yuge) deal about this.

This prompted the fairly recently re-formed (2005) Sanhedrin to send a letter to President Trump before his visit to Israel asking him to declare the “raising up” of a new Temple:

We, the judges of the Sanhedrin, the high court according to the Torah of Israel, are pleased that you are visiting Jerusalem, the eternal capital of the Nation of Israel in which the creator of the world chose as the site of the Holy Temple.

We hope that you will decide to go up to the Temple Mount, Mount Moriah, to the proper areas, and by doing so, you will merit the blessings of King Solomon, who founded the Temple with the intention that foreign leaders will come from afar to bring peace to their lands.

If that is indeed your intention, there is but one way to do this: to declare the raising up of the Temple as a universal human goal within the sanctified Biblically defined boundaries.

The attempts to find a common language with the enemy pertaining the dividing of Jerusalem and the Land of Israel are futile and will not bring any blessing.”

Their letter was based upon on the following passage in the Bible:

Likewise, when a foreigner, who is not of your people Israel, comes from a far country for your name’s sake (for they shall hear of your great name and your mighty hand, and of your outstretched arm), when he comes and prays toward this house, hear in heaven your dwelling place and do according to all for which the foreigner calls to you, in order that all the peoples of the earth may know your name and fear you, as do your people Israel, and that they may know that this house that I have built is called by your name. 1 Kings 8:41-43

So according to the Sanhedrin, President Trump is the ‘foreigner, not of Israel, from a far country’, and he’s gonna build the next Temple.

Some in Israel are so excited about this they even minted a Trump/Cyrus half shekel coin: 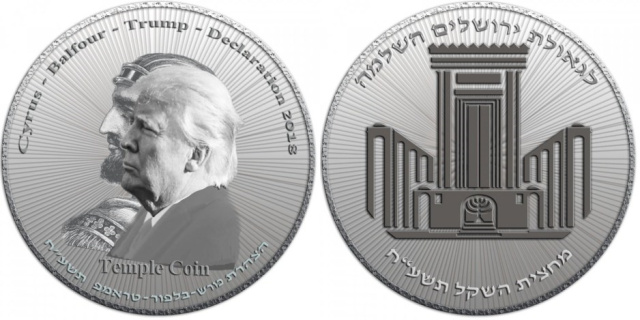 An Israeli organization said Wednesday it has minted a coin bearing President Donald Trump’s image to honor his recognition of Jerusalem as Israel’s capital.

The Mikdash Educational Center said the “Temple Coin” features Trump alongside King Cyrus, who 2,500 years ago allowed Jews to return to Jerusalem from their exile in Babylon.

Rabbi Mordechai Persoff said that Trump, like Cyrus, made a “big declaration that Jerusalem is the capital of the holy people.”

The Coin has the image of President Trump and King Cyrus on one side, and the Temple on the other.

It should be mentioned that Donald Trump is often associated with his signature campaign promise, a wall on the Mexican border, or as he has put it, “A big beautiful wall, with a big beautiful door.” He is also, so far as I know, the only US president to ever visit the Western (Wailing) wall on the Temple mount. It brings to mind Daniel 5 where writing appeared on the wall signaling the end of King Belshazzar (son of Nebuchadnezzar) and the beginning of the short reign of Darius the Mede.

King Cyrus the Great came next…

I do wonder however, why has no one used “vessel theology” in an attempt to connect President Trump to another king who built a Temple, King Herod (I think the first one)? He also was fond of construction projects, and wasn’t a Jew. No doubt my last question will earn me a few emails, maybe even a comment or two.