Robin Williams was a peaceful man, never violent so far as I am aware of. He was beloved by all and I don’t know of anyone whom he hadn’t made laugh.

Misdiagnosed with Parkinson’s disease he actually suffered from Lewy Body Dementia. Discovered after his suicide, it was this illness that led to his suicide.

Mental health has been in the news a lot since the Parkland Fla. Shooting, as it is generally after every shooting. As usual congress, (both republicans as well as democrats) and President Trump are demonizing mental illness in order to push a political agenda!

This week president Trump has not only risked alienated the ‘forgotten women and men’ who put him in office with is changing views on gun control. He also seemed open to Senator Feinstein (D-CA) about the idea of a new “assault weapons “ban.

He also discussed confiscation without due process:

Trump was responding to comments from Vice President Pence that families and local law enforcement should have more tools to report potentially dangerous individuals with weapons.

“Allow due process so no one’s rights are trampled, but the ability to go to court, obtain an order and then collect not only the firearms but any weapons,” Pence said.

“Or, Mike, take the firearms first, and then go to court,” Trump responded.

Trump: “If you can add a paragraph including Domestic Violence to the bill, It’d be great”

Then reported all over the news the next day, calls for “comprehensive mental health reform” 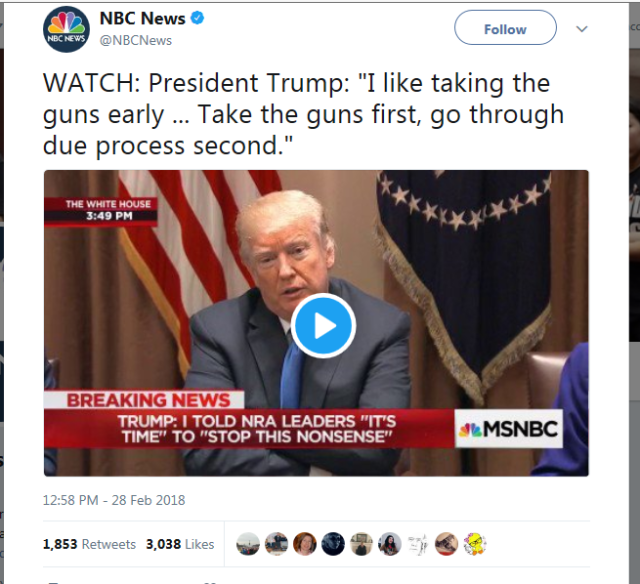 “This is one of the hardest distinctions to make,” McGinty says. “Anyone who kills someone else in a mass shooting scenario or otherwise is not what we would consider mentally healthy. But that does not mean they have a clinical diagnosis and therefore a treatable mental illness. There could be emotional regulation issues related to anger, for example, which are a separate phenomenon. There could be underlying substance use issues. There could be a whole host of other risk factors for violence going on.”

“I think we have a long way to go in terms of brain science to really understand [those] distinctions,” adds Ron Honberg, a senior policy advisor at the National Alliance on Mental Illness

But when the news reinforces these easy narratives, as McGinty’s study shows it often does, that can have serious consequences. Other research shows that reading stories about mass shootings by people with mental illnesses makes people feel more negatively toward the mentally ill. This only heightens stigma, which could lead to more people going untreated.

“Do we not risk creating further barriers?” Honberg asks. “People [may] feel like, ‘Oh my gosh, if I get identified as having a psychiatric diagnosis, people are going to draw certain conclusions.’ It’s hard enough to get people to seek help when they need it.”

A mental illness doesn’t make someone bad or sub-human, they are not defective.

The truth is there is little evidence that supports the idea that people who are diagnosed with a mental illness are more likely than everyone else to commit a gun crime. – NCBI

Most individuals with psychiatric disorders are not violent. – Harvard and The American Mental Health Counselors Association (AMHCA)

The percentage of crimes committed by people with a mental illness is less than 3% to 5%, much lower than the national average.- ”Appelbaum PS. Violence and mental disorders: data and public policy”. Am J Psychiatry.

Databases that track gun homicides show that fewer than 5% of the ‘gun related killings’ between 2001 and 2010in the U.S. were committed by people diagnosed with a mental illness.-  National Center for Biotechnology Information and National Alliance on Mental Illness (NAMI)

People with a mental illness are more likely to be a victim of violent crime, rather than a perpetrator of it. MentalHealth.gov

It’s theorized that mental illnesses such as schizophrenia actually reduce the risk of violence over time, and are in many cases marked by social isolation and withdrawal. “Nestor PG. Mental disorder and violence: personality dimensions and clinical features” Am J Psychiatry

A 2008 study conducted by Stanford University School of Medicine found that those with Bipolar disorder “expressed enhanced creativity”, in fact there have been many articles written associating artistry with mental health disorders.

Kurt Cobain, front man for Nirvana was diagnosed at a young age with attention deficit disorder, then later with bipolar disorder.

Sinead O’Connor is being treated for bipolar disorder.

Mel Gibson  has  bipolar disorder, and has stated  “I found out recently that I’m manic depressive.”

Howie Mandell has been very open about his OCD.

Actor and comedian, Jim Carrey was diagnosed with depression.

We’re all familiar with Charlie Sheen’s very public battle with mental illness and has publically discussed his bipolar diagnoses.

Just a handful of celebrities to name a few, so many have very courageously and openly discussed their diagnoses with mental health.

History of mental Health Used for Social and Political Engineering

Mental health disorders weren’t always considered bad, schizophrenia was considered an “illness of docility” up to as recent as the 1940’s. Schizophrenia was an illness that affected people’s abilities to “think, and feel” and were considered nonthreatening. Considered harmless to society” publications like the New York Times wrote many articles of “schizophrenic poets” who produced “brilliant rhymes.”

“Don’t tell them we’re all going crazy.” Better Homes Gardens. July 1947, and “Are you likely to be a happily married woman” Ladies Home Journal, March 1949.

In the 1960’s and 70’s Black men were deemed mentally ill for their activism. “Black culture” and “Black activist politics” were terms used in numerous public discussions of the mentally ill. The   Archives of General Psychiatry, described a “protest psychosis” where the Black Power movement “drove ‘Negro men’ to insanity, leading to attacks on “Caucasians” faux statistics were used demonstrating how blacks had higher rates of “insanity” that whites did, and that “growing up ‘negro in America ‘produced impairments in the capacity to participate in the surrounding culture” causing “schizophrenic types of behavior”

It’s an unfortunate fact of society, though rare, some people have violent tendencies. Sometimes these people with violent tendencies commit violent crimes. If a person has a mental illness, and doesn’t have violent tendencies, that person will not commit a violent crime. This is why millions of people who are diagnosed with a mental illness go relative unnoticed. This is why we never see celebrities such as Brittney Spears or Charlie Sheen, who in the middle of a psychotic or manic episode, don’t acquire an AR-15 rifle and gun anybody down. Sometimes people are just bad. Sometimes they are evil.

In even rarer cases demonic oppression can be involved. In the case of Nikolas Cruz he heard “demonic” voices that not only told him what to do, but how to do it as well! NY Daily News, Zerohedge, The Sun

Perhaps it’s another celebrity who put it best. You may know Mike Rowe from “Dirty Jobs”, he is someone who knows hard working folk, and someone who’s definitely not afraid to get his hands dirty. He also has a new show on TBN called “Somebody’s Gotta Do It” Awesome show as always from Mike. 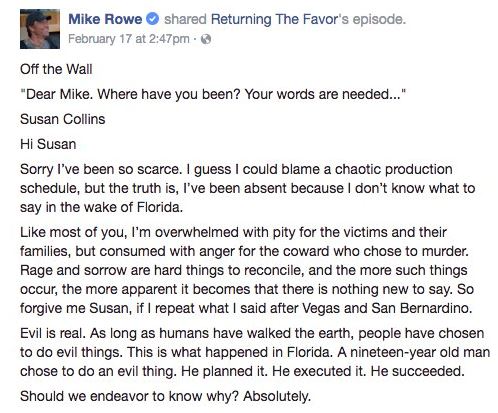 “Robin was losing his mind and he was aware of it … He kept saying, ‘I just want to reboot my brain.'”

In an essay published in the journal Neurology two years after his death, Susan Schneider revealed that the pathology of Lewy body dementia in Williams was described by several doctors as among the worst pathologies they had seen. She described the early symptoms of his disease as beginning in October 2013. It included a sudden and prolonged spike in fear and anxiety, constipation, urinary difficulty, heartburn, sleeplessness and insomnia, a poor sense of smell, stress, and a slight tremor in his left hand. Eventually, she said, he suffered from paranoia, delusions, severe insomnia, memory loss, and high cortisol levels, indicating stress. According to Schneider, “Robin was losing his mind and he was aware of it … He kept saying, ‘I just want to reboot my brain.'”